WHY I decided to have that conversation with my children 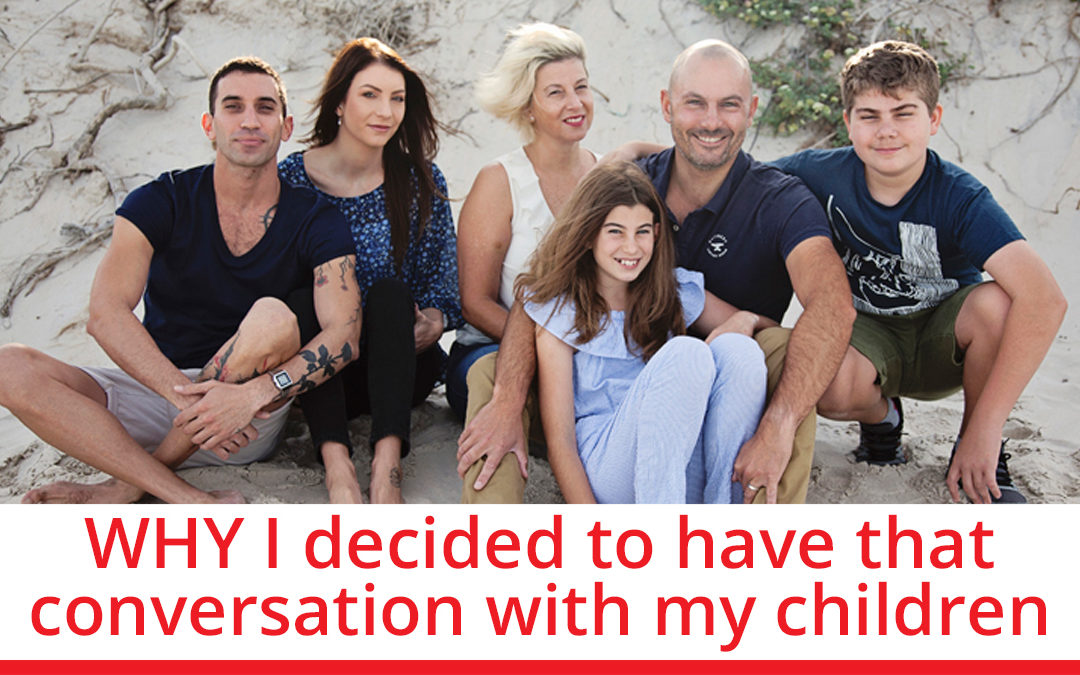 In February of 2017, I read a headline on the Timeslive website, and couldn’t quite believe what I was reading. The teenage son of my old school friend had apparently suffered a brain aneurysm at the local gym and was declared brainstem dead at the hospital. Bryn Magree was only 17 years old at the time.

After about 20 years of not being in contact, I messaged her to say how sorry I was, but I honestly had no idea what to say to her. Nobody can relate to what she and her family were going through, unless they have walked this tragic path themselves.

Some time afterwards, my son, Alexander, and I went to pay our respects at the beautiful remembrance garden Janine has dedicated to Bryn. After hugging her goodbye, both of us were silent on the drive home. It was incomprehensible to either of us that this was her family’s reality.

Janine is a journalist by trade, she has written about her unbelievably painful journey, on social media. One of the posts she has shared was about Bryn’s decision to be an organ donor. I cannot imagine what it must have been like, in that dreadful moment after his death to make such an enormous decision. And I can only imagine it would have been that much more difficult, had they not known what he wanted.

Although I didn’t know how they felt in that moment, Bryn’s choice made me wonder if, God-forbid, the worst were to happen in our family, what we might decide?  I didn’t know. How do you ask your offspring about something like this?

Let’s be honest, no parent wants to talk about such a sensitive topic. It is inconceivable to imagine that your children will die before you, let alone having to speak to them about it. Saying words out loud somehow makes concepts more real, so how do you ask an 8-, 10- and 26-year-old about their wishes regarding what will happen to their bodies after their death? Well, I did…

Dinner time is where we connect as a family. We talk about our day, and chat about interesting (mostly to our children, “the Trolls”) topics. Usually it is jovial and fun, but that night I wanted to talk about Bryn, and the life-giving decision he made.

For the first, and probably only time ever, the Trolls listened, never once interrupting me (this will probably never happen again in my lifetime). I ended the conversation with THAT question.

“If God took you home tomorrow, what would you want us to do with your organs?”

My husband, Cobus, nearly choked in shock, as I had not discussed this with him before dinner or at any point actually.

No one spoke, the dogs didn’t bark, and our usually demanding cat even sat upright and still as the Sphinx, facing forward on his chair.

Our small troll, Jacob, is autistic. This means that he is very literal and extremely practical, but even so, I wasn’t sure how he would respond.  He swallowed the shovelful he had just popped in his mouth, and said rather matter of factly, “Well obvs you must donate my body, I am not going to need it, am I? I will be dead!” Unfazed, he nonchalantly piled more food onto his fork and carried on as if I had asked him about something as mundane as the weather.

Hannah, the smallest troll, is more like her father, softly-spoken, kind and thoughtful. She said nothing at first. Cobus had recovered from virtually coughing up the lungs I wanted him to donate, and he now held his breath as he waited for his tiny girl to reply.

Her first question was “What will they do with my organs?” I answered as best as I could, with the little information I had. The second question was whether we would be okay with knowing someone else had parts of her inside them. We couldn’t answer her truthfully, because thankfully, we don’t know the answer to that, and please Lord, we never will. Satisfied, she told us that we must please do what Bryn did, as she thought it the right thing to do.

The following morning, I phoned our tallest troll to talk to him about all this too. Alexander lives in Durban and we live in Cape Town. He comes home once or twice a year, and ironically, the cupboards are emptied of snacks at around about the same time.

At first, he too was shocked to answer. Eventually he came back on the line and asked me what the hell I was asking him for? He does not like to think about his own death or any of ours obviously, but really, who does?

He went on to say that I am only allowed to “kick it” when he does because he can’t live without me. In his opinion I will be a rocking old lady despite being seriously wrinkled.

Their father on the other hand, the children believe will live forever, because he suffers from “extreme awesomeness” and is therefore immortal. Ummm… ja well no fine.

Tragically, even though we don’t like to talk about it, children do die before their parents, and it must be incredibly hard to consent to donating your child’s organs at such a devastating moment in your life.  However, having had the conversation with all three of our Trolls, we will never have to wonder if we made the right choice if God does one day call them home.

We have also told our close friends and family what our wishes are, because should my worst nightmare ever happen, and we are not around to make the decision, it will already have been made.

I have been a blood, organ and tissue donor since my early twenties, this in spite of my doctor telling me at the time that they might give them back because I have the immune system of a goldfish. Cobus and Alex are now also registered organ donors.

Yes, I put them there, if I hadn’t it would have gone on the list of things-to-do, so it would never have been done.

It is as easy as clicking on the register here button on this page or visiting www.hero777.co.za or https://www.odf.org.za/ to register.  Be someone’s hero one day!