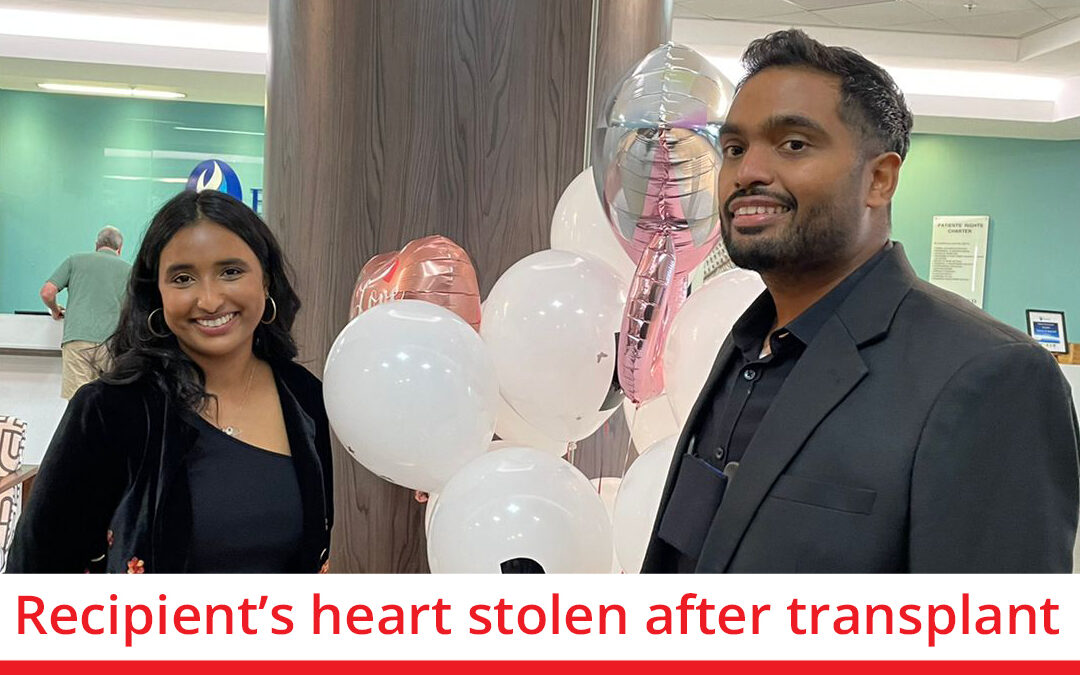 There aren’t many who can boast of recently having walked out of hospital nine days after major surgery and immediately proposing to the love of their lives.

A goal-driven investment officer in the corporate finance sector, providing assistance to small and medium-sized enterprises, he describes himself as “Out there!” and says he is passionate about everything he does.

“You only live once. Well, in my case a few times,” he quips, referring to his new lease on life, “but I make full use of every day.”

“A clear and positive mindset” has been imperative to coping, and Navern says chanting and meditating are a valuable part of his mental toolkit. “There’s got to be something extra-terrestrial or a higher power that’s kept me around for a purpose,” he adds.

Navern is also an “absolute sports nut.” He loves a challenge and he loves people.”

Apparently, they love him too. Transplant co-ordinator, Cindy Goldie, who was closely involved with the transplant procedure gave a glowing report of him. Her outline was of a “tenacious young man who has grabbed his second chance with both hands and is looking forward to a bright future – something that was so fragile prior to his transplant.”

Factoring high on his list of second chance goals was something Navern says he had been planning prior to receiving the call for his transplant. “I had found the design and jeweller and was getting quotes and custom designs done the weekend prior,” he explains.

“On the day when I got the call to come through for my heart transplant, I obviously did not know what the outcome of such a major op might be, so that morning I went over to my parents’ place and gave them all the details and jewelry.”

Fortunately, his recovery from surgery was amazingly quick. The only issue, from Navern’s perspective, was the idea of spending another six months in an isolation bubble before being able to plan a holiday in some exotic location, where he’d be able to ensure a truly unforgettable proposal. 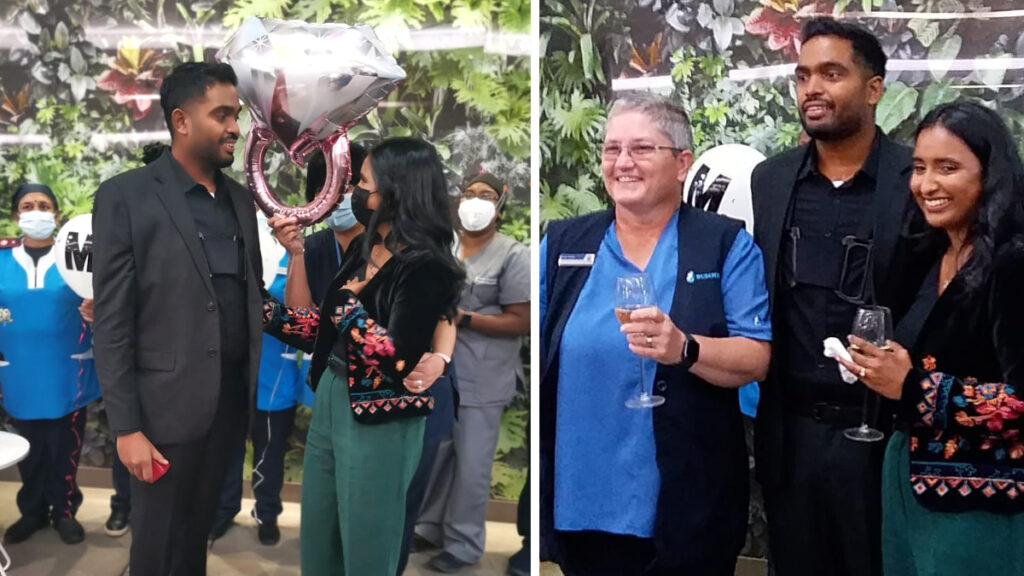 Dressed smartly in black, supposedly in case of media attention, Navern gave a speech thanking his surgeon who conducted his life saving surgery, the medical staff who had kept him alive since 2008, as well as his family for all their support.

At the end of his speech, he called on Sherice Roopai, to make him the happiest man in the world by agreeing to marry him. Nurses in the background turned around the balloons they’d been holding and together, they spelled out the words, “MARRY ME.”

Devoted Sherice has been a major part of his life for over 10 years. She says that, “Navern is a strong willed and determined person. He shows extraordinary courage and strength, even in the most devastating situations. He loves sport, whether watching or playing, and prides himself in keeping healthy and fit.”

The part of his story which should serve as a lesson to all is that until 2008, when he was 16, Navern was a normal, robust teen, but he picked up staph virus, and ended up having a double valve replacement. In other words, any one of us could end up needing an organ, no matter how healthy we are.

At the time, he was in ICU for 60 days. He had to learn how to walk, learn fine motor skills and even write again. It was challenging to say the least. But he was also faced with the greater challenge of having to complete his matric the following year!

It was a difficult journey for the next few years and a miracle he survived this long.

In 2019, Navern collapsed on the roadside in Johannesburg. Doctors discovered his ejection fraction (heart function) was poor at between 10-15% as opposed to the normal range of 55-70%. They told him he needed a pacemaker with defibrillator to keep him alive in the hopes that he might receive a transplant. Ironically, three years to the day after having the pacemaker and defibrillator implanted he received his transplant.

A cardiac defibrillator monitors the heart rate and delivers a strong electrical shock to restore the heartbeat to normal in the event of tachycardia (abnormal heartbeat.)

When asked if his condition had affected his attitude to life, Navern admits he did have to make some amendments to his lifestyle and regular hospital visits were the norm. But he would like to think he did not let this change his attitude. “I’ve always been quite a positive person, who loved sport and the outdoors. I’ve always lived life to the fullest – I mean I was still enjoying a round of golf right up until the time of my transplant!”

But in spite of his cheery optimism, it could not have been easy needing a transplant in the middle of a pandemic. “I’ve literally lived in a bubble since the start of Covid due to my extremely high-risk category. I had to pick and do the things I enjoy sporadically. The upcoming months will be much the same, but I’m excited about the future!”

Describing the differences between life pre-and post-transplant, he says the change has been massive. “The strain is lessened. It just feels normal now. Although it hasn’t been the longest period to judge, a simple walk is less strenuous and much easier. The meds are quite an adjustment and my body will take some time to adapt to them, as they are quite intense. But I do understand it’s a slow process, so I’m in no rush.”

The sports-mad Navern says he used to play multiple codes at advanced levels, but that he was forced to reduce and even stop some of these activities due to his medical conditions.

If transplant co-ordinator, Cindy Goldie, has anything to say about it, she will soon have him back on the golf course, showing the world just what a winning heart transplant recipient looks like.

Navern’s family have been his biggest supporters. “They’ve stuck by me selflessly through it all, always putting my best interests at the forefront.”

His employer, Business Partners, has also been amazing, according to Navern, and has supported him through his hardships. His job has also helped him not to focus on his own woes. Navern says he has enjoyed having the opportunity of seeing how his job helps make a difference in people’s lives. “It gives you a great sense of satisfaction,” he says.

Navern credits his “best mate, Marley” with being one of his greatest allies. “My naughty labrador retriever is a golden bunch of joy!” he enthuses. “A therapeutic being, who listened to all my venting right up until I had to leave for the transplant.”

Whilst Marley may indeed be an excellent listener, there are some things a canine simply cannot manage, and that is where helpmeet, Sherice, comes in. 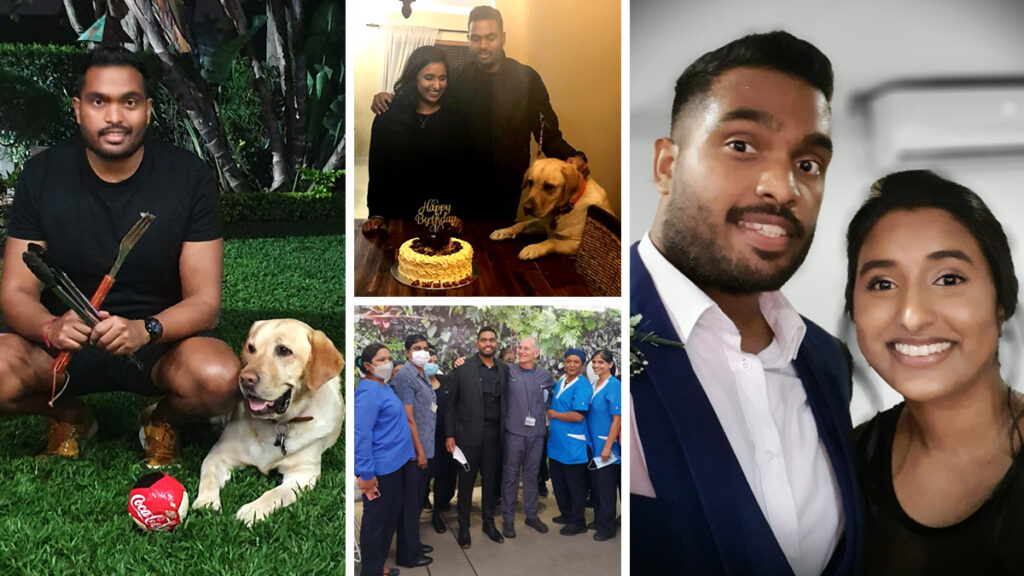 Asked whether special allowances had to be made for Navern pre- and post-transplant, she explains: “It’s difficult during your prime years to slow down and live more cautiously. Navern has always tried to do his best without letting his health condition limit him, but there were obvious day-to-day activities that I had to cover, so as not tire him out. It is also important to attend doctors’ consultations, so that you understand the limitations they face.”

She says this allows her to be more understanding and have reasonable expectations. Acknowledging that one cannot pour from an empty jug, Sherice expands, on this, saying that “It’s also important, as part of the support structure, to take time for yourself so you can always give of your best.”

Navern’s determination to make the most of his new circumstances is uplifting. “Life motivates me,” he says. “Having a second chance every day motivates me. Due to Covid you naturally do think chances are slim… Now this new lease on life just opens up so much more to me. I’ll be going at life hammer and tongs. I have lots of ideas and plans to give back! So that’s my drive.”

If he could, he says he would offer his sincerest condolences to the donor family. “You have lost a loved one and that is something that can never be forgotten. In saying that, my sincerest gratitude because in that state, you chose to offer a new life to an individual like myself! No words can thank you enough for that kind gesture.”

Navern also says not nearly enough is done to promote organ and tissue donation. “As a bare minimum, it should be included in life orientation and the government should punt it more.”

He also says sponsors need to be found to assist in raising awareness in the media. He plans to set up a public benefit organisation to hopefully attract corporates to ensure the cause gains more coverage. “I’m living proof of the benefit!”

Asked what he would you like to say to South Africans about organ and tissue donation, Navern says, “Get involved! You can save up to eight lives and give someone a chance or glimmer of hope – a new life!”

He also extends a massive thanks to the Busamed family. Without them I wouldn’t be here, able to tell my story.