20 years on borrowed time – a warts an’ all account 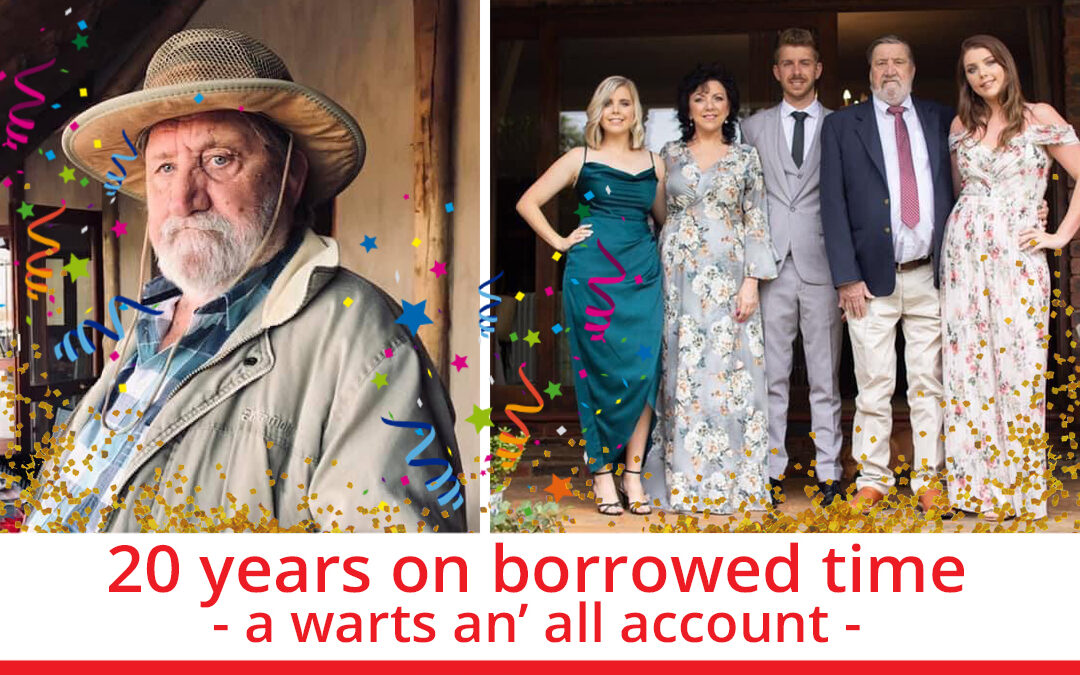 There is a certain proud glow that radiates off Alan Hoyte, 75, as he looks at his wife, Karin, or any of his “four fantastic children.”

It comes as no surprise then, that when asked what his greatest accomplishments are, Alan’s family is the first thing that comes to mind. “They’ve been the greatest inspiration for me. All of them are doing fantastically in their respective jobs,” he expands.

Alan also lists serving the community and giving back to others as a Round Table member for 23 years as a notable accomplishment. He was a “forty-oner” for years, travelled the world with the Round Table and is justifiably proud of becoming Area Chairman and being on the Round Table’s National Board.

In his time with the Round Table, he acted as convenor of a number of projects, including the Learn Project and Help a Child to Happiness, as well as being responsible for setting up a massive boat show in the Durban Harbour in 1974.

In 1963, Alan was presented by the Prince of Wales with the prestigious Duke of Edinburgh’s bronze award for endurance and for taking part in a number of challenges.

These included surviving two nights in the veld on his own, which was no great feat for him as he says he loves the bush. He also underwent various fitness tests, travelled to Canada to participate in forestry, and did a railway signalling course, another of Alan’s many proud achievements.

Aged 55, Alan contracted a virus that attacked the heart muscle. He was placed on the provincial
transplant waiting list for three months. He was then bumped up to the top of the national list due to the urgency of his situation, and waited a further two months to receive a heart.

Alan’s wife, Karin, says he has always been a strong, positive person. He was never afraid of the transplant procedure or the outcome, she asserts, and says that Alan is exactly the same person after the transplant as he was before – not afraid of anything! 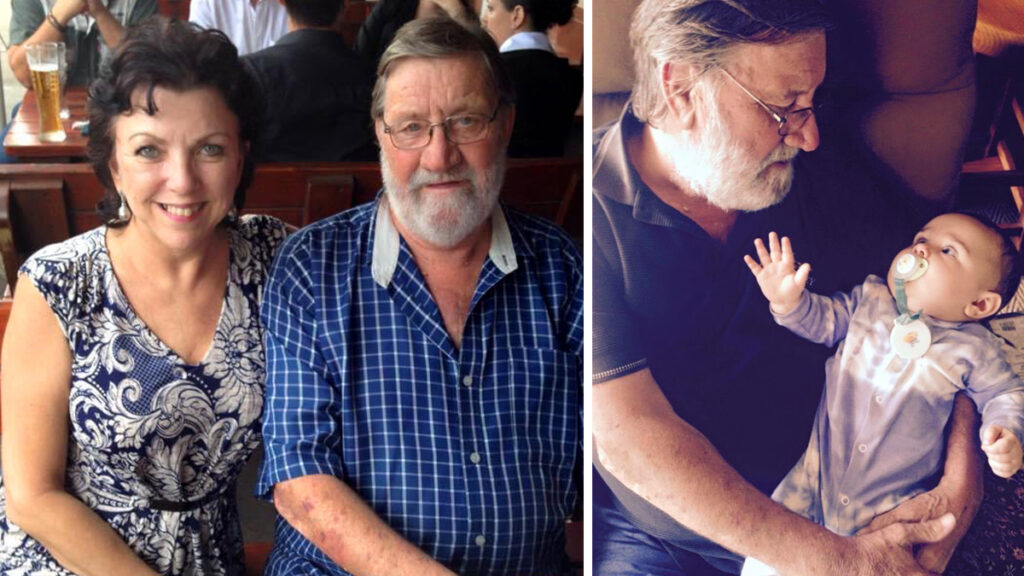 Life pre-transplant was good, she says, and the couple were kept busy with three small children who were close in age and apparently, well-behaved. Alan was an older dad and often quipped that, “God knew not to give old men naughty children,” she says.

He was very involved in their lives and activities, but things took a drastic turn when he fell ill and it was enormously difficult for the family to adjust, especially the children.

Karin says their lives came to a virtual standstill overnight. From being a very present dad at all the children’s sporting events, playing with them in the garden and going away often as a family, Alan suddenly needed care 24/7, as he could not shower, was unable to dress himself, put on his socks or even eat.

Karin took on all of this, as she did not want to burden anyone with requests for help. She took the children to their sporting events and cared for Alan herself, but says this was to her detriment and that the children did not understand why things were so different in those traumatic five months.

Post-transplant was tough for the first year because of the unknown, Karin acknowledges. “It was a huge thing, especially for me, because rejection is something that gives no warning signs. It could be anything from going off your food to feeling nauseous, to getting flu-like symptoms, or body aches, so in the beginning we were paranoid about anything that he felt, thinking it might be rejection.

“As soon as Alan started to get better, all my wheels fell off,” she says, “and I suffered from Post Traumatic Stress Syndrome. The stress factors during the 20 years were always there and always huge.”

Being an older transplant patient was also a concern, as Alan did not have a healthy body at the time of the transplant, since he had been a heavy smoker.

“But Alan made things easier for the family by not being nervous or scared. He always believed.”

Karin says that Alan has an amazing sense of humour, which must have helped in the rough times. “He is extremely intelligent and his general knowledge is phenomenal, says his wife, “though his wit sometimes drives us insane!” 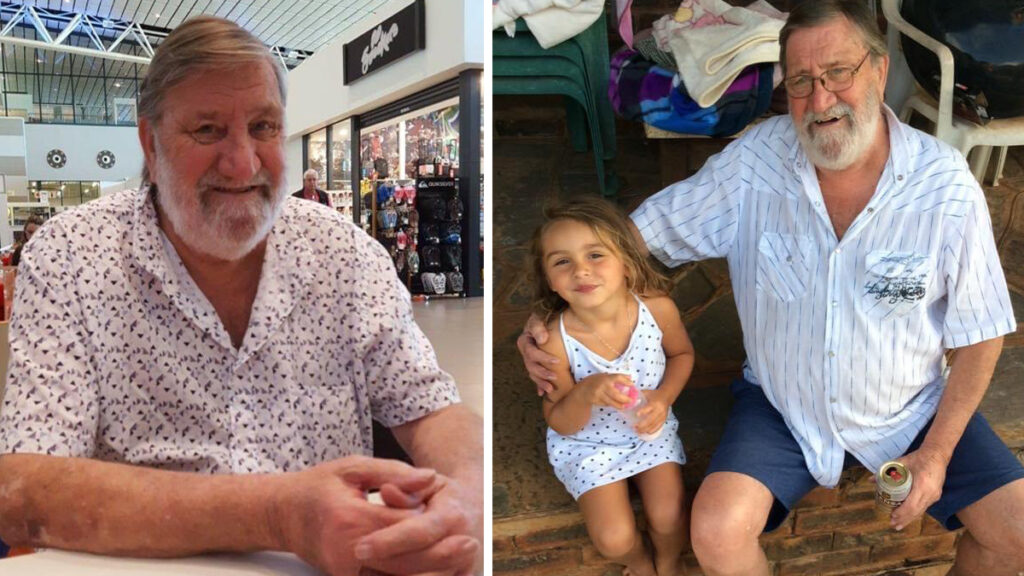 These days, Alan’s interests are varied and include vintage cars and buying and selling coins on Bid or Buy – he spends hours on this hobby and on his iPad, which Karin describes as the bain of their family’s lives. “Crosswords, Sudoku, he loves the challenge and has to be kept busy all the time,” she says.

His weakness? “Drinking too much wine,” Karin jokes.

Alan says he’s passionate about life and “so grateful for the extra 20 years that were added on to his life.”

He feels his worst hardship is that he has had to give up two successful businesses. He does not attribute this directly to the heart transplant, but says his right side was affected not long after the transplant and that the anti-rejection medication makes him shake, so he is unable to hold a pen and write.

He does find the lack of mobility, which prevents him from walking around the garden, frustrating, but puts a practical spin on things, chuckling that this is probably due in large part to the fact that he is, after all, 75 years old.

Aside from this, Alan does not feel that having a transplant has really impinged on his lifestyle.
“Obviously having to take pills every 12 hours is something I’ve got used to. It also has side-effects and I get growths and moles on my face.” He has had several bouts of skin cancer and carcinomas over the years.

After 20 years of living as a heart recipient, does the family have to make special allowances for Alan? Karin says that outings are limited at present, due to Alan’s mobility being restricted. He has supplemental oxygen from a CPAP machine when he sleeps, so weekends away are a challenge. He is also currently not in the best of health, so somebody has to be with him daily.

Alan’s biggest supporters are undoubtedly his family, who have stood by him throughout this whole episode. His friends have also been invaluable. “They’ve all contributed in some way or another,” he says, to ensuring that he is well and that he has company most of the time.

Asked to relate an amusing or poignant anecdote in reference his illness, Karin giggles that Alan’s virility was never in question. But she was so worried that he might expire, that she rejected his advances for some time. When he plucked up the courage to ask for a professional recommendation, the doctor told him that if he was “able to raise the flag”, he should use it.

Asked about his bucket list items, Alan says that he “would love to go on the Blue Train” and “to live a happy life until he is called to the Big Round Table in the sky.”

Asked whether enough is done to promote organ and tissue donation, Alan is vehement in his opinion that a great deal more should be done.

The Hoytes themselves went on e-TV when Alan was on the waiting list. Karin says they wanted to tell their story that here was a man with three small children and he needed to live! Their aim was to prompt people to consider signing up as prospective donors, not just for Alan’s sake, but because there were thousands of patients who would die without the organs that they need. 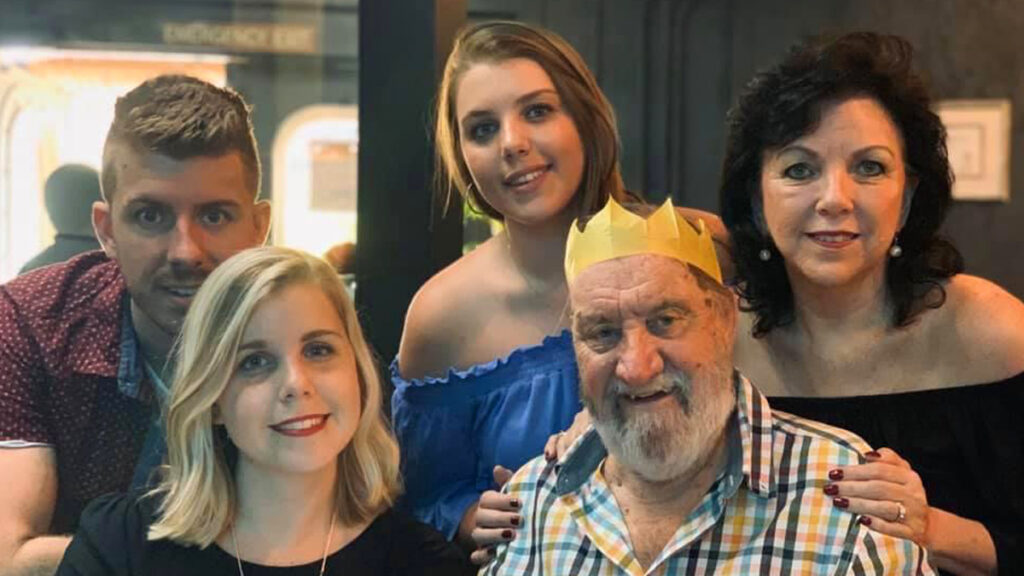 Alan says, “People still seem to be afraid. They don’t realise that when the body is dead, anything that can be retrieved should be given automatically. It’s so unfair to let somebody who’s waiting for an organ suffer, and not offer the body to help that person.

“I think if we make people more aware of exactly what does happen, perhaps through donor awareness programmes in shopping centres, for instance, then there would be more donors.”

Whilst awaiting his transplant, Alan was introduced to, and mentored others who were also awaiting organs. The couple drew the conclusion that there are a great many misconceptions and much prejudiced thinking around the process.
They give the example of a man who told Alan in the waiting room at his doctor’s office, that unless he was guaranteed of receiving a heart from someone of his own race, he would not be prepared to have a transplant. This sentiment angered Alan, as he felt it was tantamount to kicking a gift horse in the mouth.

“Often people don’t realise that even if you do sign up as a donor, your family still has to approve the procedure,” says Karin.

The couple also tell the story of well-meaning friends and family who phoned before the Easter long weekend to wish them well. Their view was that Alan might “get lucky” because of the anticipated increase in road accidents over the Easter holidays, but Karin says that “whilst we had hope, it wasn’t a nice feeling, because for Alan to get his heart, somebody had to die. That was difficult for us, especially for Alan. It’s not an easy path to walk. It’s very emotional. It’s a very, very special gift that is given and saves so many lives.”

Alan adds that, “Life is precious and I think more people should be looking into the ways and means of donating organs. A lot of people don’t know what’s going on, so they shy away from donating. If they really understood what they were doing for the recipient, they would be more likely to adopt a positive attitude.”

On the subject of what he might say to the donor family if he could, Alan says it is a difficult and emotional question to answer. “Thank you so much for what you did,” he says. “I know for a fact that your son’s heart saved me, but his body also saved four other people that we know of, and saved my family.

“He’s given me the opportunity to see my kids get married, which I would never have been able to do, and perhaps even see my grandchildren, who knows?

“It’s inspiring that I’ve managed 20 years. When I first had the transplant, I thought well, if I get five or six years out of it, I’ll be lucky. To have come this far and still be able to walk around on a level surface amazes me.

“Tell people out there, if you need one and can get a transplant, take it with both hands because it really is worth it. I’m at 20 years already, I could go another five years. The longest-living transplant patient in South Africa is, I think, 23 years.”

Karin says the experience has come “with a lot of challenges. None of us thought we’d get to 20 years and here we are! We share our story wherever we go because not enough people know enough about organ and tissue donation. We try in our own personal way to reach more people and spread awareness.”

If you feel inspired by Alan’s story please consider registering as a potential organ and tissue donor and tell your family. Click on the register here button.