Have a heart, support uncle on life-saving mission 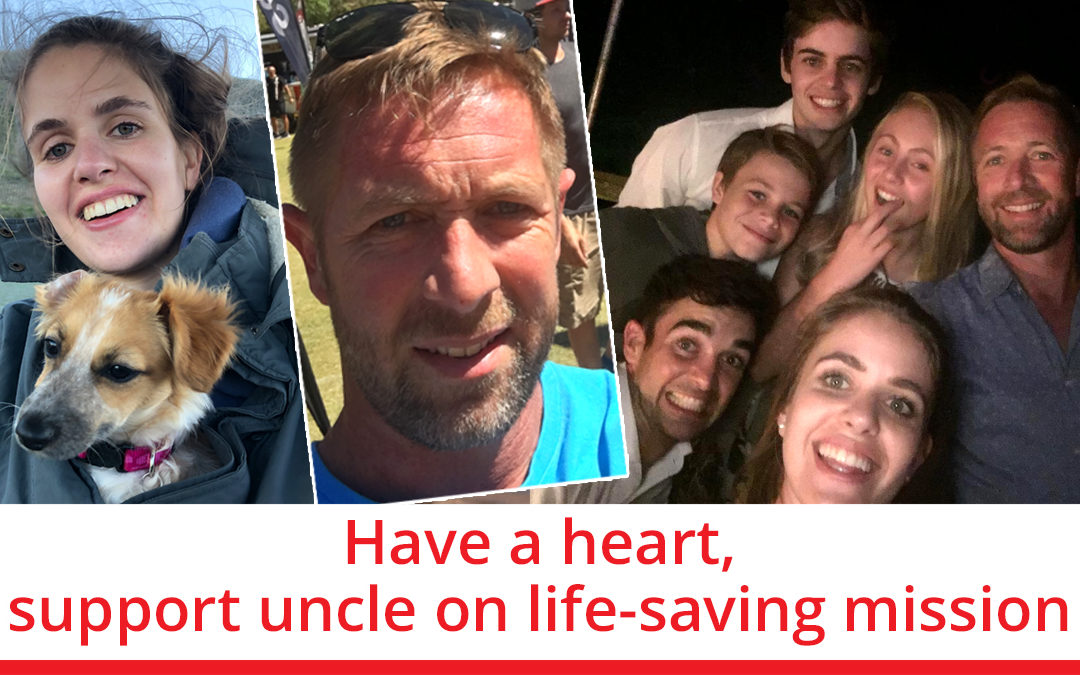 CONSIDERING her mantra, which boldly states she is getting stronger with each day, sparkly-eyed Jamie Waller, 25, is not one to succumb to bad news. With a penchant for photography and art, she is described by her family as being “creative and full of fun.”

Looking at a photograph of her giving a thumbs-up from her hospital bed last year, you can picture her as the life and soul of a party.

Jamie’s faith is important to her and she adores her family, friends and her dog – this writer did not want to stir up a hornet’s nest by asking where her dog actually ranks on Jamie’s list, but it seems safe to say Daisy Waller, (I’m told it would be impolite to say what breed she is), is right up there with her best friends.

Jamie’s mother, Heidi, says she is the bravest person she knows. In fact, Jamie comes across as one of those young women who, no matter what obstacles come their way, never fail to surprise you with their can-do, positive attitude… And boy has this fresh-faced 25-year-old been dealt a rotten set of circumstances!

At age 23, everything seemed to be going swimmingly. Jamie was in her element; she had left home and was working in an environment she enjoyed; doing marketing and administration for the EOGA Golfing Academy.

One Saturday in October, Jamie, who had apparently been in the rudest of health, found she was coughing and struggling to breathe. She was duely admitted to Life Kingsbury Hospital with what was thought to be pneumonia.

The next thing she knew, a chronically ill Jamie was being sent to Life Vincent Pallotti Hospital, where she was given the rather shocking diagnosis of dilated cardiomyopathy. The doctors did not know the cause, but said it was probably a viral infection that had brought on this serious condition. A year later, this vital young woman was placed on the heart transplant waiting list.

In March this year, Jamie was admitted to Christiaan Barnard Hospital, after her condition had deteriorated. An LVAD (left ventricle assist device) was inserted as she was so ill that she had taken to sleeping for around 18 hours a day. Covid-19 did not help matters and being unable to work or go out, Jamie lost some of her breezy confidence and understandably ended up a bit of a recluse. As if all this weren’t enough, Jamie has suffered a stroke and has had to relearn to speak, read and write.

According to her mother though, since the LVAD has been fitted, she has begun online courses, and is going out of her way to meet and speak to people. She wants to get on with her life, work and travel to see her Dad in Switzerland as soon as this is allowed.

Through all that has happened to her, Heidi says that she has never once felt sorry for herself or complained. Jamie is fortunate to hail from a close family. She lives in Cape Town with her mother and stepfather, Shaun and younger brother, Josh, (23) lives in Sea Point. She also has a half brother and sister, twins, Kyle and Ella (11) who live in Switzerland.

Her mother’s brother, Leon Oosthuizen, who is six years Heidi’s junior, lives in Hilton in KwaZulu-Natal, yet is really supportive, albeit from a distance, and obviously shares his niece’s zest for life.

In Heidi’s words, “Jamie has always found Leon entertaining and amusing.  At most family gatherings, such as Christmas, Leon will be found in a tutu or Borat outfit and Jamie will bluff that she’s shocked, but she quietly adores him, and is so proud of her uncle. She also adores his wife Sue and their daughter, her cousin Ellen (14).

Jamie doesn’t see Leon as “just an uncle.” Heidi says Leon makes Jamie laugh and that she knows he loves her, which is just as well, because Leon has really stepped up to the plate to try and make a difference, not only for his pretty niece, but also for everyone who might need an organ now or in the future.

Leon, who has always been involved in sports in one form or another, from hockey to squash, mountain biking and trail-running, has taken on the mammoth challenge of a 132.30km “Jog for Jamie”, which starts at The Junction in Nottingham Road and ends at Sani Pass. Anyone who has driven this mountainous route, knows that it “aint” for sissies!

Leon has never participated in anything longer than a 65km Ultra Marathon, so to attempt this so-called “jog” is no mean feat. He modestly claims that his reasons for doing the jog started out with the “selfish” motivation of needing a challenge, as he had not been able to take part in any events due to Covid-19 restrictions.  He says this then lead to his thinking the run might be a good way of raising money for a worthy cause, and then he says he “obviously thought of Jamie.”

“I approached Heidi and asked her who Jamie would want me to do this for – at the time Jamie was in hospital about to have her LVAD procedure. Their response was the Organ Donor Foundation.”

Asked what had determined the distance and route of his run, Leon says, “I was looking for a long run and initially was going to run 100km to Underberg from Nottingham Road, but then I chatted to a mate, who told me about this route that was part of the Fastest Known Time (FKT) website, so I thought since it had not been run before, I would try it.

“It has been a bit of a logistical challenge with the Covid curfew,” says Leon. Also, the Sani Pass border only opens at 6am and closes at 6pm, so I have had to try and time it right to get up and down the pass during these hours. Let’s hope I have calculated everything correctly.” 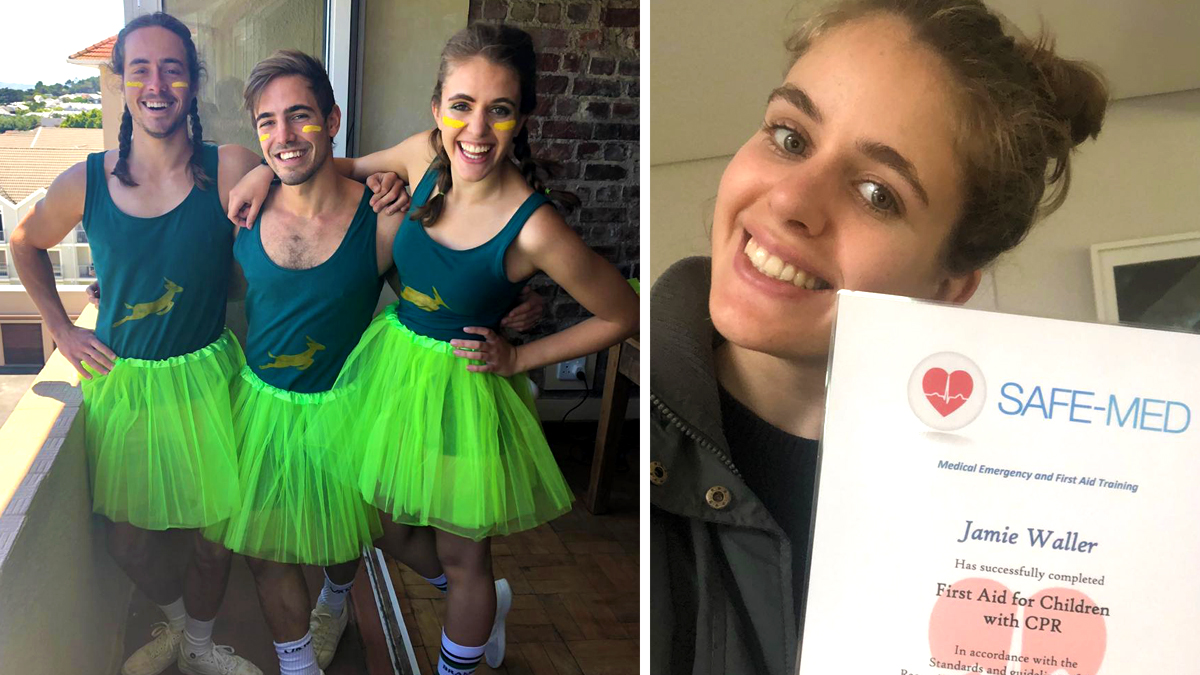 The reason Leon opted to run on May 28th is a pragmatic one – he says it was close to a full moon and that he wanted a bit of light whilst running at night. Leon says it is purely coincidental that the run coincides with the beginning of the World Transplant Games 5KAnyWay which is being held from May 28th to June 4th, 2021. The Transplant Games which were scheduled to take place in Houston this year had to be cancelled because of Covid-19, but the Houston Sports Authority decided to host a virtual 5km done any way you choose, which is aimed at including the transplant community worldwide.

When asked what he hopes to achieve by completing this run, Leon, who has been an organ donor for close on 20 years, says that raising money for the Organ Donor Foundation would be great, but qualifies this by saying, “I am very aware of the shortage of organs, so I really wanted to create awareness as well.”

With only 0.2% of the population signed up as potential organ and tissue donors, his concern is very real. Too many South Africans claim they are unaware of how to go about becoming organ donors, or that they have reservations, so hopefully, this event will go some way towards challenging the status quo.

To gain more insight into organ donation, or to sign up as a donor, you can visit www.hero777.co.za and/or www.odf.org.za.

Friends of Leon’s from his school – Maritzburg College – have been tagged in the Organ Donor Foundation’s post about the “Jog for Jamie” initiative, as have The East Coast Trail Running Community, local newspapers, The Witness and The Meander Chronicle, as well as several other organisations, and he says the support has been heart-warming.

“Events or challenges like this would not be possible without support,” says Leon. “So I am very grateful to have friends and family who are prepared to sacrifice their warm homes to come and sit in the freezing cold and help me through the night.”

His wife, daughter, and a couple of friends, (Jo and Dusty Webber and Vanessa and Dave Hounsel) will be in support vehicles, keeping pace with Leon through the night. Along the route, he says there will be various other groups of people cheering him on. Running mates, Ginge McKenzie, and Phillipa Gordon will start and run as long as they can keep up. And friends from Leicester Floors, Jono De Souza, (also joining him as one of his running mates,) and Gareth Melly will probably be at the Nottingham Road start.

Leon’s Brokersure colleagues will be stationed along the route, probably near Himeville, where he turns to begin the steep ascent up Sani Pass, and he says that Neil Henderson will be joining him at Stepmore to run/walk a further 20-25km to the Himeville turnoff.

Leon adds that the support his venture has been getting from the wider public has been great: “We’ve had two donations of R10 000 so far, and we are expecting a further AUS$1 450 together with a number of smaller amounts, so far totalling R40 000 (This amount does not include the anticipated donation of AUS$1450.)

When asked if he had considered any special gimmicks up his sleeve to punt his niece’s cause a la “Spinnekop” – who braved a route from Pretoria to Lüderitz in a Spiderman mask in 2018 – Leon quips that he hasn’t gone that far, but says he will, no doubt, have on tights as he braves the cold temperatures in the Southern Drakensberg (-2°C at that time of year.) 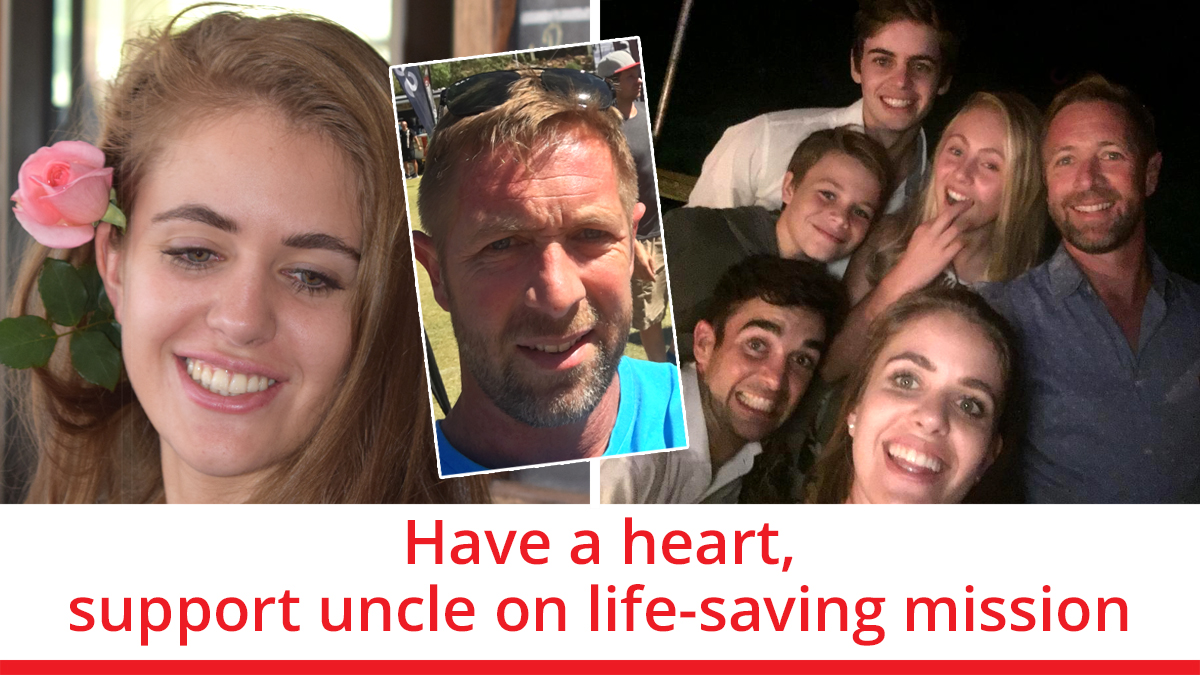