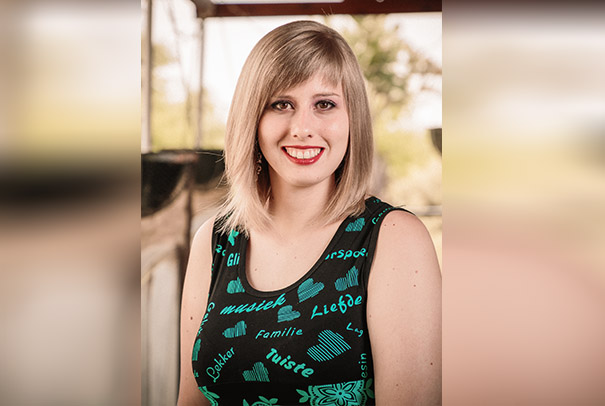 I have always had a heart for cancer patients. When I was in high school I knew that one day I would make a difference in the lives of cancer patients. Little did I know what a big impact I would have!

It all started with me hearing about a two year old girl who needed a bone marrow stem cell donation. I knew nothing about how the process worked and one day I called up The Sunflower Fund and told the lady that I wanted to donate my bone marrow to Susie. The lady told me that I could not just donate to anyone and that they were looking for a match. I was rather disappointed and asked how I could be a part of the donation process. She put me in touch with The South African Bone Marrow Registry and said that I had to fill in a few forms and give some blood for their medical records.

The Sunflower Fund came to Stellenbosch University in 2008 for their annual Shavathon and Hair Spray day. I was so excited to see them at my university and was able to give my blood to one of the nurses which was shipped off to The Bone Marrow Registry.

One day, one and a half years later, I was in one of my lectures and had received three missed calls. One was from my boyfriend, another was from my mom and the third was from a number unknown to me. I called up my boyfriend and asked why he had called me. He told me that my mom had called him to ask where I was as there were people looking for me to donate my blood as I could be a match. At this point, I had no idea what was going on. I then called the number I had missed a call from and a lady answered. I had not even told her who I was on the phone before she frantically said they had tried getting hold of me and that they needed my blood to see if I was a potential match for someone needing a bone marrow transplant. I could not believe what I was hearing! I was a potential match for someone! They told me that there was a 1 in a 100 000 chance of being a perfect match for a patient so they needed to do all the relevant and necessary tests to see if I was a match.

I had one blood test done and a few days later it came back as a match. The next step was to courier my blood overseas to have it tested for DNA to see if it would match the recipient. This took three weeks and one day while I was having a driving lesson, my phone rang and it was the lady from The Bone Marrow Registry saying that I was a perfect match! They wanted to start organising the donation then already and I had to complete a few forms and have a medical check up to see if I was in a fit condition to donate. The medical checkups all went well and the doctor gave permission for me to donate my bone marrow the following year.

I was 20 years old when I donated. My mom was allowed to accompany me on my donating journey as I was under 21 years old. I was given numerous growth hormone injections over a ten day period, to boost the production of my white blood cells. This was a rather uncomfortable process as I had flu like body aches and growing pains in my joints. Nevertheless, the big day came and I was put into the donation room at 7am that morning. Prof Jacobs was the doctor who administered the donation. He was such a lovely man. He had to put a tube (the size and thickness of a straw) up my main artery in my right groin. This tube was attached to the harvesting machine that harvested my white stem cells from my blood. I was on the machine for seven hours that day and I was quite exhausted afterwards! The nurses who attended to me were absolutely wonderful and did a fantastic job in looking after me. After day one, the doctors came together to see whether I had donated enough stem cells for the day. They measure this according to the body weight of the recipient. As I was smaller and lighter than my patient, I had to donate again the following day for another seven hours.

During and after donating I was very emotional. So many different emotions go through one’s mind and body. I had been thinking and wondering how my patient was doing, whether his body would accept or reject my stem cells and how this act of kindness could save his life.

About five months after donating my bone marrow stem cells, I received a letter from my patient! I was not allowed to know who my patient was for medical and confidentiality reasons. All I knew was that he was a man and that he was just a few years older than I was. He wrote me such a beautiful letter explaining how he had been sick for many years and that he and his family had been praying for a miracle. The best part of the story is that my bone marrow stem cell donation had changed his life and healed him!

Donating my bone marrow stem cells was the best thing I ever did! I know that in my giving, I shall also receive. I am blessed to know that I could make a significant difference in the life of someone and that he now can live his life in abundance and to the best of his ability.