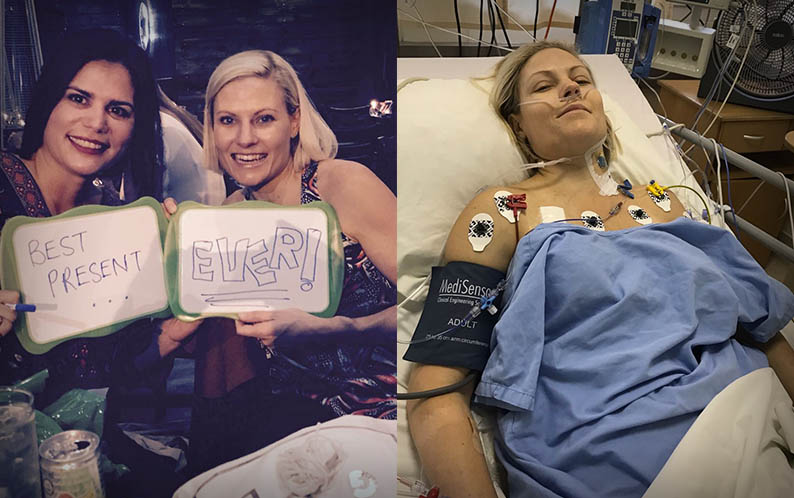 After finding out I was in kidney failure 6 years ago I embarked on a quest to find out as much as possible about the kidneys, as I didn’t feel ill nor did I have any symptoms accompanied with kidney failure. I sought the opinion of many doctors all telling me I needed dialysis. I wasn’t ready for this as it was not an option…yet! I wanted to try everything possible before needing to be on dialysis which involved most alternative treatments you can think of, from homeopathy to acupuncture to detox programs, to Ayurveda treatments and totally changed my diet and eliminated meat, wheat, sugar, salt, dairy, caffeine and alcohol.I managed to keep my kidney function stable for nearly 3 years and my results did improve but unfortunately my kidneys took a turn and went into complete failure. 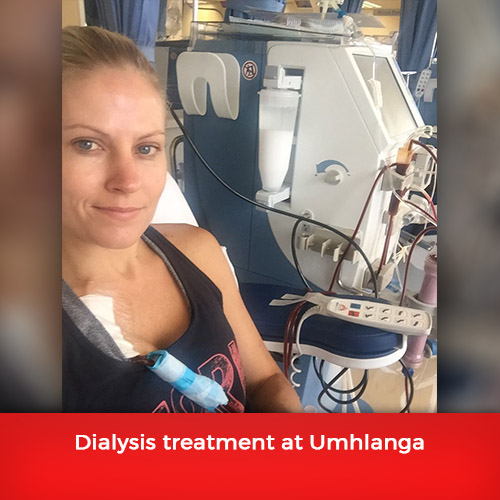 My body was weak and taking serious strain. I was out of breath, exhausted, had a yellow tinge and my legs and feet were swollen. It was time to accept defeat and begin dialysis treatment. I soon learnt that the dialysis machine was keeping me alive but long term I needed a kidney transplant. Unfortunately, none of my family members were potential donors, so the process of searching for a live donor began. At the same time, I joined the national organ transplant list and after doing the maths (based on number of transplants happening in South Africa currently and where I was on the list) I worked out I could have waited up to 9 years until I received a kidney from the list. This was heart breaking!

Despite everything I remained 100% positive. I knew that, somehow, I would find a donor. Sometimes you don’t know exactly HOW something is going to happen, but just that it IS going to happen.

On the 1st September 2015, Laurie Smith made the most selfless decision anyone could ever make…she made the decision that she wanted to donate her kidney. When I asked Laurie why she wanted to do this for me she told me her brother had sadly passed away, but he had been an organ donor and had saved 12 children’s lives with his bone marrow and gave 2 people their sight with his corneas. The impact an organ donor has on one’s life is priceless.Laurie’s passion and willingness to be an organ donor is admirable and she has set such an example for those wanting to donate and help others. 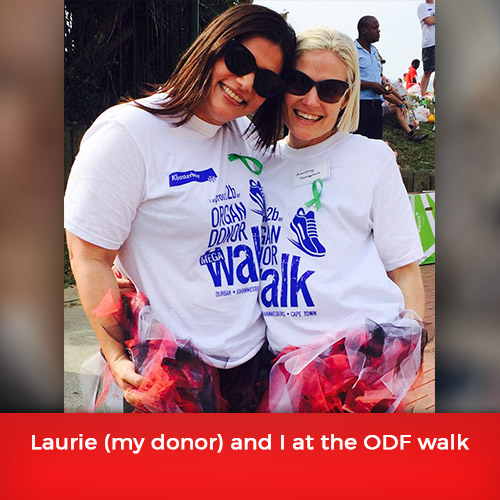 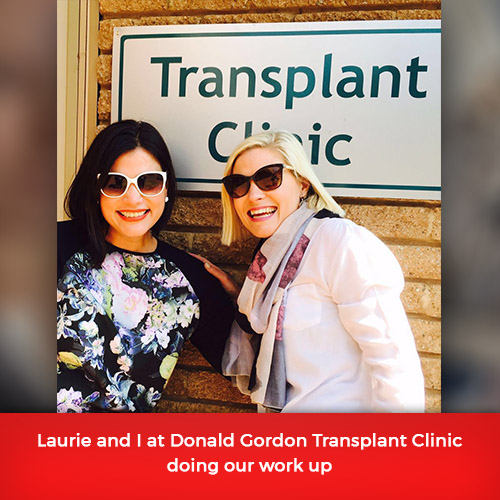 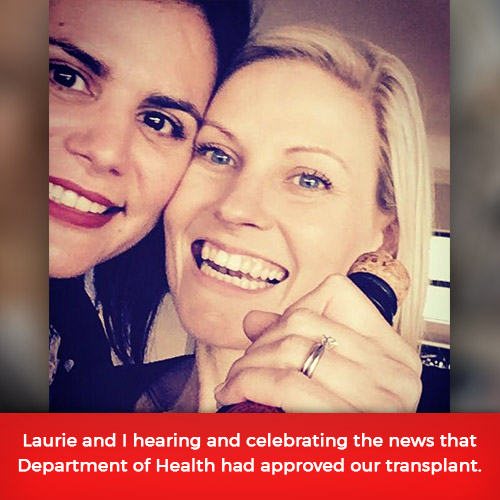 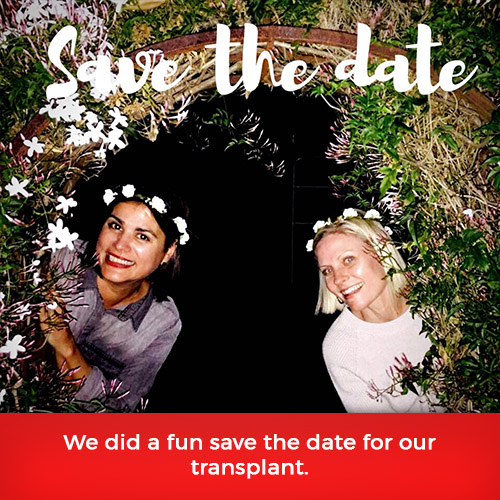 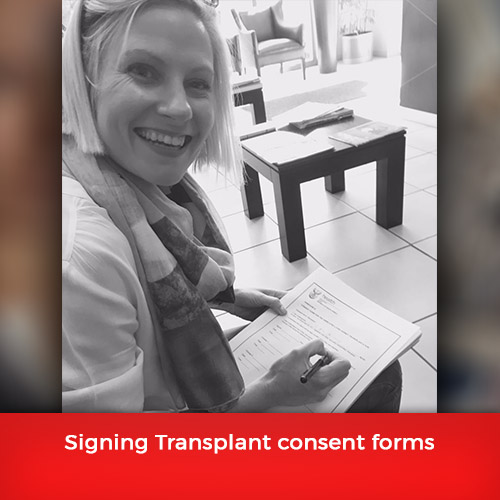 On the morning of the transplant we checked into Donald Gordon Medical Centre and were taken to a private room that soon became like a chaotic train station filled with doctors, nurses and family coming and going, all attending to Laurie and I. Hundreds of forms to fill out and sign, final cross matching and blood tests being done, scrubbing up and getting ready for surgery… our big debut was about to go down.Laurie was wheeled into surgery first and then I went down a little while after her. Once Laurie had gone into theater, it hit me…I was about to get a new kidney; my life was about to change. It suddenly became very real! 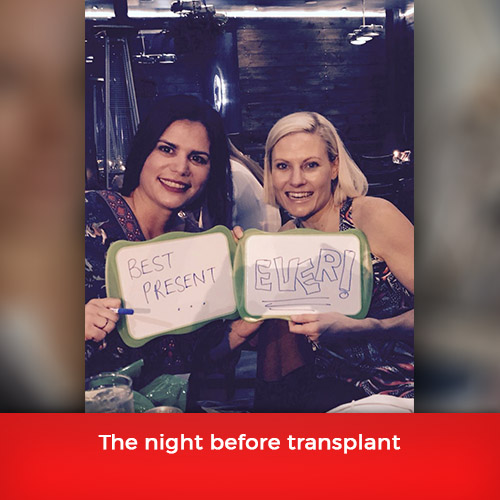 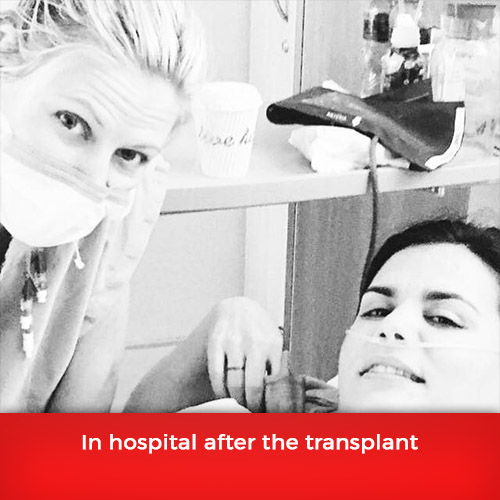 When I woke up that afternoon after the transplant, the first thing I wanted to know was if Laurie was OK and if everything had gone well. It was such relief to know both surgeries were a success and Laurie was fine and my new kidney was producing urine…like a racehorse.Once the pain had eased off and I was over the effects from the anesthetic, I started to feel great. 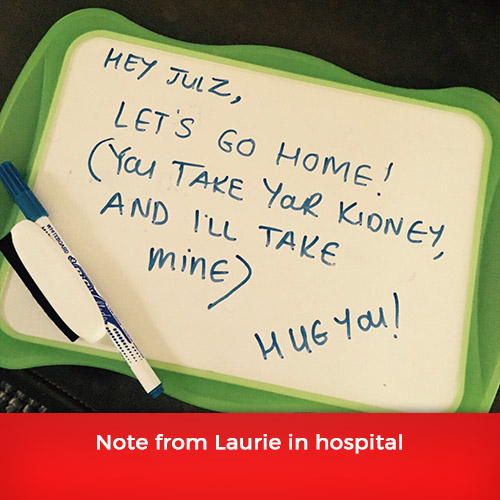 A week after the transplant I was discharged from hospital and headed home for 3 months in isolation because I was taking high doses of immune suppression medication to avoid the body rejecting my brand-new kidney. The dosage reduced over the 3 months and soon I was given the all OK. I was weeing like a champion, was able to drink unlimited fluids (two simple things in life one really appreciates when you don’t have them) and my levels were all in range for the first time in years. 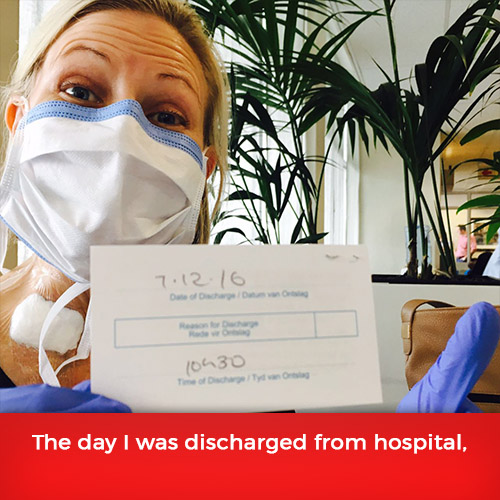 It has been 14 months since the transplant and I can honestly say I am in the best shape I have been in 10 years! I’ve never been more committed and in love with life. Since the transplant, I have maximized the time I have been given (not being restricted to a dialysis machine) and I really try and appreciate each moment. Life is beautiful and there are so many reasons to smile and embrace each new day. 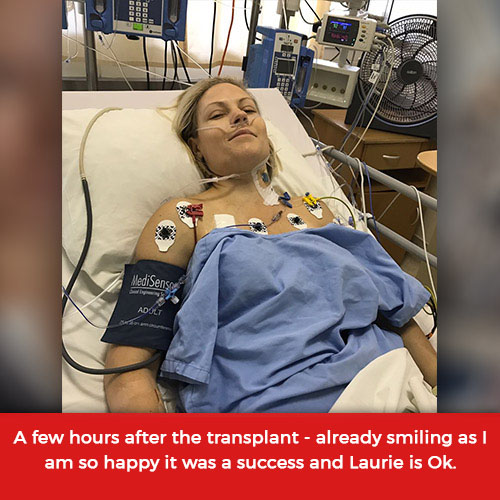 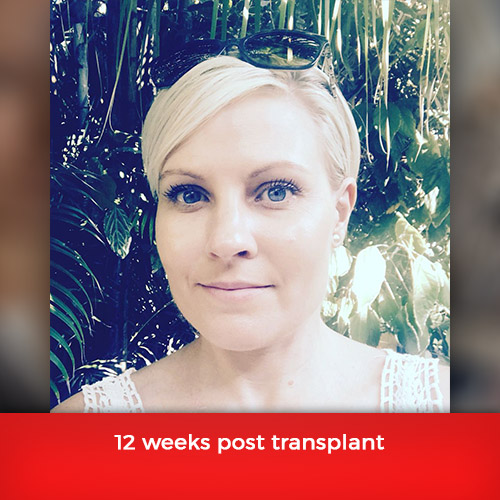 I want to encourage others to live a healthy life, to get checked up on things like blood pressure and diabetes and know your kidney function but also that there is life after dialysis and kidney failure. Dialysis is a short-term solution to assist you while you are sick. There is this fear around having a transplant which I even experienced before I knew anything about it, but it is the answer in getting your health and life back. 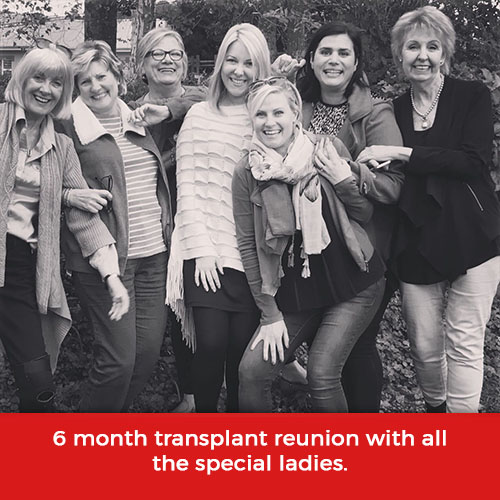 To my hero, my beautiful donor, my kidney sister. I can’t say enough about my donor Laurie. I will never be able to express the magnitude of my gratitude for the amazing gift Laurie has given me and my family. It’s really a remarkable story. A story of second chances. We have formed such a strong bond and friendship and know we will be in each other’s lives forever. I adore her, and a day doesn’t go by where I’m not thankful for her incredible gift. People like Laurie make this world a better place and I am so grateful she chose me as the blessed recipient to her kidney. Laurie, thank you for saving my life and giving me the opportunity to live a full life. 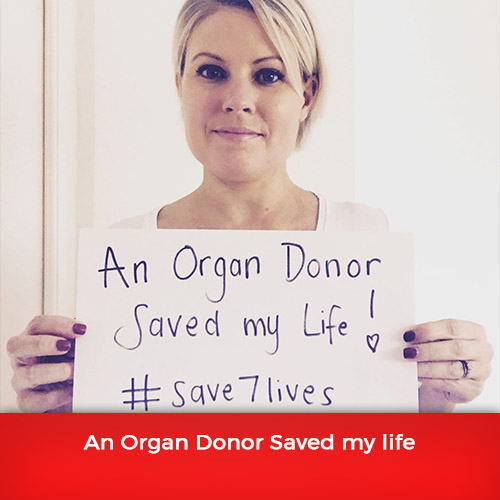 Organ donation saves lives. Organ donation is something that is very real to me and something I am very devoted to.There is a critical shortage of organ and tissue donors in South Africa (less than 0.3% of the population are registered organ donors) and there are so many people on waiting lists. This foundation may not seem important or relevant to you right now, but when you or your loved one becomes ill or is involved in an accident and needs an organ to save their life, the need becomes very real and so that is why this is something that requires our attention and support. 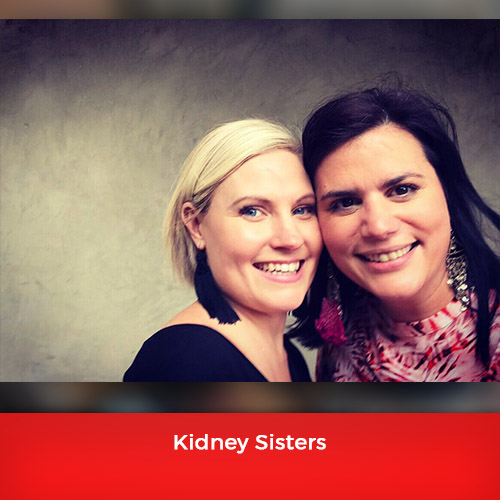 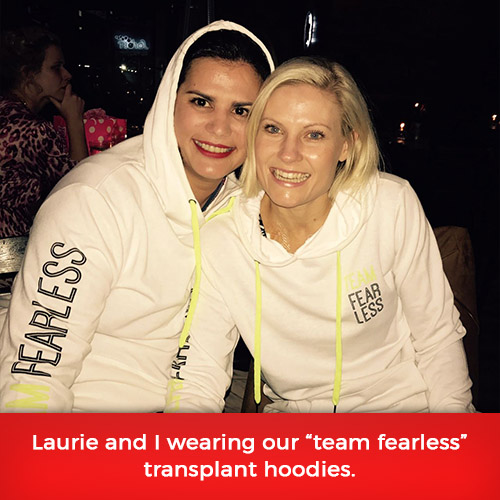 I want to encourage everyone to sign up as organ donors, as during this journey I have come to realize the limited number of organ donors we have in this country and what a difference one person can make when they leave this world. You can save seven lives with your organs and many more with your tissue, bone marrow and corneas. So, I really encourage you all to sign up today through www.hero777.co.za and share your wishes with your loved ones as they are the ones who make the final decision.