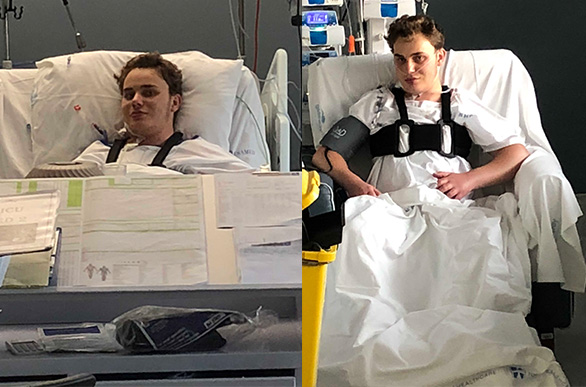 By T+ 7 Matthew was doing well, but we were almost too scared to be happy – we worried that the “next bump out there” might cause a serious setback. Matthew, on the other hand, was talking up a storm – asking for chocolate mousse and coke. He had received physiotherapy from Danika van der Post in the morning to clear his lungs and ensure nothing sinister developed. By lunch time Matthew’s right leg was bothering him again and I think boredom had set in. We told that he will never live down what he said next and it is definitely one to keep on hand for his twenty-first birthday! He asked when his MASSEUSE was coming back! He had everyone in hysterics because he meant his physiotherapist!

As I wrote that comment about Matthew’s twenty-first birthday I realised that we are now thinking and planning for more than just a month ahead. Just this week I booked a holiday for when Matthew reaches six months post transplant, it felt so strange. For more years than I can remember, we have left things till the last minute as invariably we have had to cancel our plans due to Matthew not being well.

Shortly after our first visit of the T+7 morning, early of course, we popped back in a little later after shift change to see Matthew, and he was no longer on Airvo! The surgeon had removed the Airvo that morning, and said that Matthew should have CPAP (Continuous Positive Air Pressure} for 10 minutes every hour instead. His SATS were sitting at 98 – 100 percent so unless his vitals changed this would stay like this or now.

We were in awe of how God had carried him and us through this incredible operation and the initial post transplant period. As we sat and waited between visits or walked around to stretch our legs we talked about how out of this world these all seemed. The more we thought about it the more we realised the enormity of what had occurred … and how the decision of an incredible donor and donor family had put it all in motion. They certainly are incredible people.

Knowing what was happening, helped us to feel like we had some semblance of control in a situation that we had no control over. So we asked questions all the time and communicated with everyone, to try and get a full picture of what was happening to Matthew.

It was early evening when we saw Mr Kleinloog again and he was very happy with the way Mathew was responding. The day ended with the news that some lines and even a drain would probably be removed the next day. Each good thing that happened was one more step closer to going home. The surgeons and his cardiologists were happy with his progress. We were continuously reminded though that there were still some small hurdles to get under control, the present one being the effect that some of the medication was having on his platelet count. This would need to be sorted out but in the big scheme of things this was a small hiccup, hopefully easily resolved. 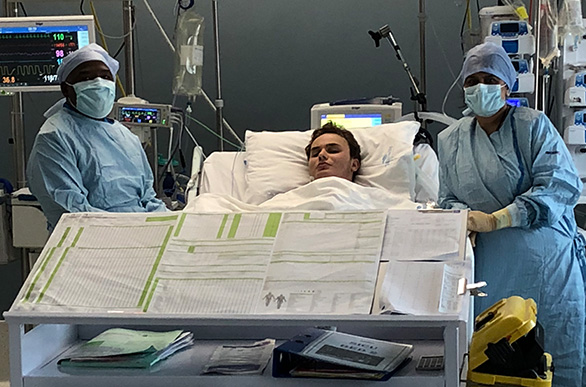 I never wrote down and can’t even remember what the weather was like during our stay in hospital with Matthew. Often it was dark when we got to the hospital and dark when we went home – it felt a bit like living in England! All we know is that each morning we were greeted with huge smiles of encouragement and kinds words from all the staff we came into contact with at Busamed Gateway Hospital. Often as we sat in the comfort room, someone from theatre would pop their head around the door and ask “How is Matthew doing?”. Those long hours of waiting over the last days had often been broken by someone coming over to chat or encourage us.

It was such a joy to see Matthew looking very pink that morning. He was perky but fast becoming bored. He wasn’t allowed to have his phone or computer, so was also a little grumpy. I am sure that over the weeks he was there, he went through social media withdrawal!

He didn’t realise that he still had a way to go to get all the drips and drains out and the medication settled and was itching to come home. This was going to take another week or two at least. A huge positive for us was that he remained on room air except for the ten minutes on CPAP every hour. It was so strange to see him without at least nasal canula on. What a miracle this was!

The doctors just told us that morning that they are very pleased with Matthew’s progress but that the left lung had some issues that needed to be sorted out.

We kept getting warned that the bumps were coming but we continued praying against them all and at the end of the day very few occurred. However, today we also realised that Matthew’s right leg issue wasn’t going to be a quick fix and would probably hamper his recovery. His leg was incredibly sore, he was experiencing shooting pains in it and he could not stand on it at this point. A doppler was done on the leg to check for a thrombosis which we were happy to find out wasn’t there. A neurosurgeon surgeon was brought in to check if a nerve had been injured.

We know, since leaving hospital, that his sciatic nerve is bruised or injured and will take a while and lots of physiotherapy to heal. This healing process is also hampered by the need for Matthew to be on cortisone medication. As this reduces in the months to come, we trust the inflammation will follow suit, and walking will become a lot easier for Matthew. 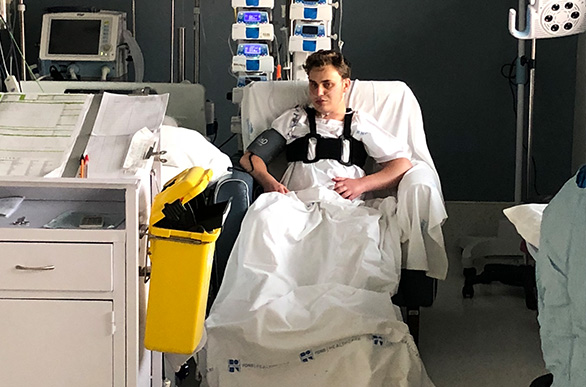 With Matthew feeling a little down late in that afternoon we sent a WhatsApp to some of his friends and teachers asking them to message him through the hospital’s message portal on their website. Any messages would be brought to us to read to him. He loved hearing people’s news and receiving all the messages people sent him. We also played him all the voice messages he was receiving from the doorway of his cubicle each day.

We are convinced that it was because of all the support and prayer for Matthew that the next bump was quickly identified and sorted out and that Matthew could continue the healing process, but more of that in T+9.